1. The influence of low temperature on battery discharge capacity

Capacity is one of the most important parameters of a lithium battery. The curve of its size with temperature is shown in the figure below. The figure below is the discharge curve of a lithium iron phosphate battery. For lithium iron phosphate batteries, the end-of-charge voltage is 3.65±0.05V, and the end-of-discharge voltage is 2±0.05V. The two curves are the temperature capacity curves obtained when the battery is discharged at different temperatures at 0.1C and 0.3C. Obviously, the capacity gradually increases as the temperature rises, and the capacity at -20°C is only about 60% of the capacity at 15°C. In addition to capacity, the open circuit voltage of the battery decreases with temperature. We all know that the energy contained in the battery is the product of the capacity and the terminal voltage. When both multipliers are reduced, the energy in the battery must be the superposition of the reduction effects of the two.

At low temperatures, the activity of the cathode material decreases, so that the number of lithium ions that can move and bring about the discharge current decreases, which is the root cause of the decrease in capacity. 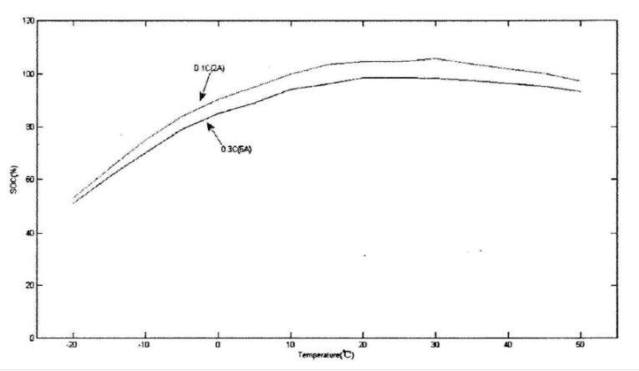 2. The influence of low temperature on battery internal resistance

At low temperature, the diffusion and movement ability of charged ions in the positive and negative materials becomes poor, and it becomes difficult to pass through the passivation film of the electrode and the electrolyte, and the transmission speed in the electrolyte is also reduced, and additional production will be generated during the transmission process. A lot of calories. After lithium ions reach the negative electrode, the diffusion inside the negative electrode material also becomes unsmooth. Throughout the process, the movement of the charged ions has become difficult. From the outside, it is the internal resistance of the battery that has increased. 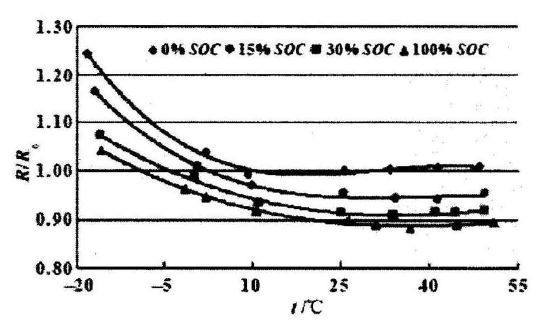 The relationship between internal resistance and SOC and temperature

3. The influence of low temperature on battery charge and discharge efficiency

The following curve is the curve of charging efficiency following temperature change. We can observe that the charging efficiency at -20°C is only 65% of that at 15°C. I only talk about efficiency here. The harm of low-temperature charging is very serious, so I won't discuss it here. The low temperature brings about the various electrochemical performance changes described above, and the internal resistance increases significantly. During the discharge process, a large amount of electric energy is consumed on the internal resistance to heat up. The Coulomb efficiency we observed has decreased. When an electric car is driving, you will feel that the battery life seems to be about the same, and the battery life becomes shorter at low temperatures. 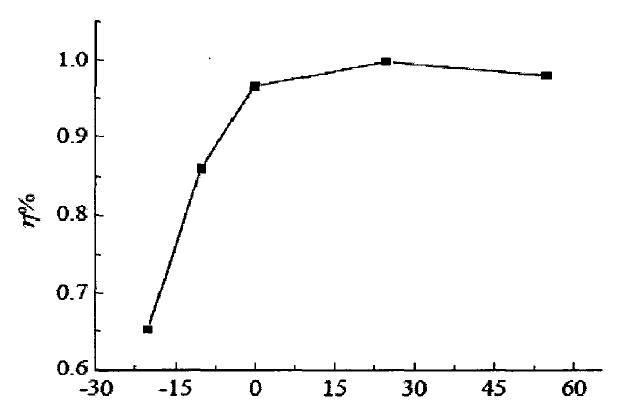 4. Side reactions inside lithium-ion batteries

The performance of lithium batteries deteriorates severely at low temperatures, and some side reactions occur during the charging and discharging of lithium-ion batteries. These side reactions are mainly the irreversible reaction between lithium ions and the electrolyte, which will cause the capacity of the lithium battery to decline and further deteriorate the battery performance.

Faced with the limited use of lithium batteries at low temperatures, the response strategy that technicians found is charging and preheating. Although it is a stopgap measure, it has obvious effects on improving the discharge capacity and long-term life of lithium batteries.

Regarding the method of heating with air, some researchers have conducted experiments using batteries and a set of atmospheric simulation systems. The experimental results show that batteries with heated surrounding air can release more capacity than batteries exposed in a low-temperature environment.

Compared with air heating, liquid heating has better thermal conductivity and higher heat conversion efficiency. But liquid heating requires a more complicated heating system. There have been many practical cases of the application of liquid heating in electric vehicles and hybrid vehicles. For example: in a Chevrolet Volt car, the heat exchange fluid surrounding the battery pack is heated by a 360V heater.

Compared with external heating, AC excitation heating is another commonly used heating method, which is simpler in structure design, which is to heat the battery through alternating current. It does not need to design the heat transfer structure, but loads the positive and negative electrodes of the battery with a certain frequency of AC excitation, and the excitation acts on the electrochemical substances in the battery, which is equivalent to the effect of cyclically reciprocating small amplitude charge and discharge.

Compared with direct current heating current, alternating current or positive and negative square wave current can heat the battery during both the discharge and charge cycles, causing the battery temperature to rise, while the battery state of charge (SOC) is basically unchanged. Because of these characteristics, the AC internal preheating method has become a field of more research. In 2004, a foreign researcher first proposed to use alternating current to directly heat lithium-ion batteries, only using the internal resistance effect of the battery to generate heat. They did some tests on different batteries in different SOC states and at different temperatures (-20℃~40℃). The test results show that under a certain rate of current, all batteries will quickly generate heat.

A team in the United States conducted a study on the influence of heating frequency on heating effect. They conducted simulations at different frequencies from 0.01Hz to 2KHz, and compared the results with external heating methods. They believed that internal heating has obvious advantages.

Compared with the external heating method, the internal heating avoids long-path heat conduction and the formation of local hot spots near the heating device. Therefore, internal heating can heat the battery more uniformly with higher efficiency to achieve better heating effect and easier to achieve.

At present, most researches on internal AC preheating schemes focus on heating speed and efficiency, and heating strategies rarely have clear considerations for preventing side reactions such as lithium deposition. To prevent the generation of lithium deposition during the preheating process, BMS needs to be able to estimate and control the conditions of lithium deposition in real time. A model-based control battery heating technology at low temperatures is needed to achieve the above functions. With the development of new energy vehicles, the use of power lithium batteries is increasing day by day. The use of lithium batteries at low temperatures urgently needs to solve the battery preheating problem, which is a field very close to practical applications.